With the latest record snow fall just a week ago, there were questions about the ceremonies for the Honor Stones this last weekend, April 21st. But as Kay Anason, Donation Coordinator for The Highground put it, â€œSoldiers donâ€™t have a choice when called into battle, so the ceremony must go onâ€. Mother Nature however worked to the benefit of The Highground providing a beautiful fifty-degree sun filled day for the first Honor Stone ceremony of the 2018 season. This was one of The Highgroundâ€™s first events of the season as they celebrate their 30th Anniversary. Nineteen stones were laid in all, for 14 different friends and organizations commemorating so many amazing people and their stories. With over 300 people in attendance for the event, the 2018 season started with a huge success.

Norm Snortheim and Family take a moment before ceremonies begin.

Norm Snortheim and his family from Marshfield, WI laid a stone in honor of his son Russell, to whom he lost to cancer three years ago, with his name attached as well, as father and son were both honored for their service. It was dedicated by his three other sons Randy, Doug, and Dan, as well as Russellâ€™s widow, Brenda. â€œI got the plaque for Christmas from my three sons who are still living,â€ said Norm. Russell served in the Navy from 1986-1991 and Norm had served in the National Guard from 1956-1964. Norm was seen taking pictures with him and his family, holding his one-month old Great Granddaughter, his first, Eleanor Lee. When talking about him first finding out about the stone he commented, â€œI cried, it was something that I never expected.â€ The surprise came on Christmas this last year, as Norm and Brenda opened their present together to remember the cherished Russell. â€œWe were sitting around on Christmas, we had to open it at the same time, it was writing in a frame that was written up from the boys and their families. It really touched me.â€ 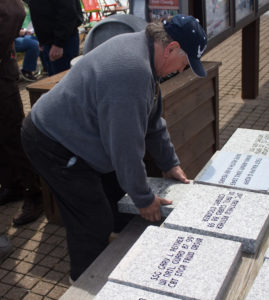 David Week takes a moment to view the stone that bears his fathers name. His father fought in WWII in the Pacific Theater, and comes from a long line of Veterans.

The Week family was another family from Wisconsin Rapids, WI who made the trek to The Highground in order to be part of the ceremony to honor their father, Everett. â€œHe was in WWII on the U.S.S. Randolph in the Pacific Theatre. What was nice about this place here, I went up and Jon Weiler got all the information on the U.S.S. Randolph, they were very accommodating, finding out this stuff because my dad really didnâ€™t talk that much about it,â€ Said David Week. â€œIt was really interesting because we found out so much stuff; it was the first ship that got hit by a Kamikaze.â€ Terry, his brother added â€œHe told my son in law more about it then he told meâ€, with a chuckle. David added, â€œMy brother Jodi was the one that spearheaded it. What really got us going on it was one of our other veterans had just passed away seven months ago, and he told me, your dad used to stop up there all the time. He would always stop over here on his way to Uncle Oleâ€™s and leave a donation, it was kind of neat to go that full circle and have one out there for him.â€ The Week family had three of the seven brothers on hand, â€œWe have a lot of veterans in our familyâ€ said Greg, as he did a run-down of the family that which was sitting with them, almost all were veterans, married to veterans, or had sons who were veterans.

This was Executive Director Jon Weilerâ€™s first Spring Stone Ceremony at The Highground as he took over from long time GM Kirk Rodham in July. Weiler served 28 years in the Army. When asked about what itâ€™s like to be part of the 30th Anniversary of The Highground, and the influence of all that came before him to make the park what it is â€œI didnâ€™t even know that it was the 30th Anniversary coming up when I came here, knowing that Iâ€™m the one to officiate the first Honor Stone Ceremony of the 30th year is really an honor and a privilege,â€ stated Weiler.

While this is his 6th stone ceremony at The Highground, he has experienced a lot of emotions in that time. â€œThe stone ceremonies are very unique, it allows everybody to come here and honor veterans, their families, or someone in their family who sacrificed so much. Sometimes itâ€™s for a Veteran that they may have never known, someone who died in WWII for an example, but they feel a connection to and want to honor them in this way. Other times itâ€™s for Veteran that is still with us, and we get to thank them, the family loves to thank them, itâ€™s truly an honor to be able to experience this event with those families.â€ The VFWâ€™s and other organizations are a big part of the stone ceremonies, in this event; the Honor Guard was led by the American Legion Post #94 in Crandon, and the VFW Post #7131 in Pittsville. â€œWe have a lot of stones throughout the park that are honoring the American Legions, VFWâ€™s, and VVAâ€™s throughout the state and region. The Second stone that we did today, for the VFW from Pittsville was honoring their Quartermaster who passed away last October.â€ Weiler talked at length about what he has learned and what a unique experience in regards to the stone ceremonies in particular â€œSometimes these families donâ€™t know what to expect when they arrive, how they are going to feel. Most of the time they expect to feel â€œthis it is no big dealâ€. But when they get here, and they see that this actually is a very big deal, we see emotions all over the place. Itâ€™s an amazing place. It is our honor to have these stones here, and we treat those stones, and this ceremony with a tremendous amount of respect.â€