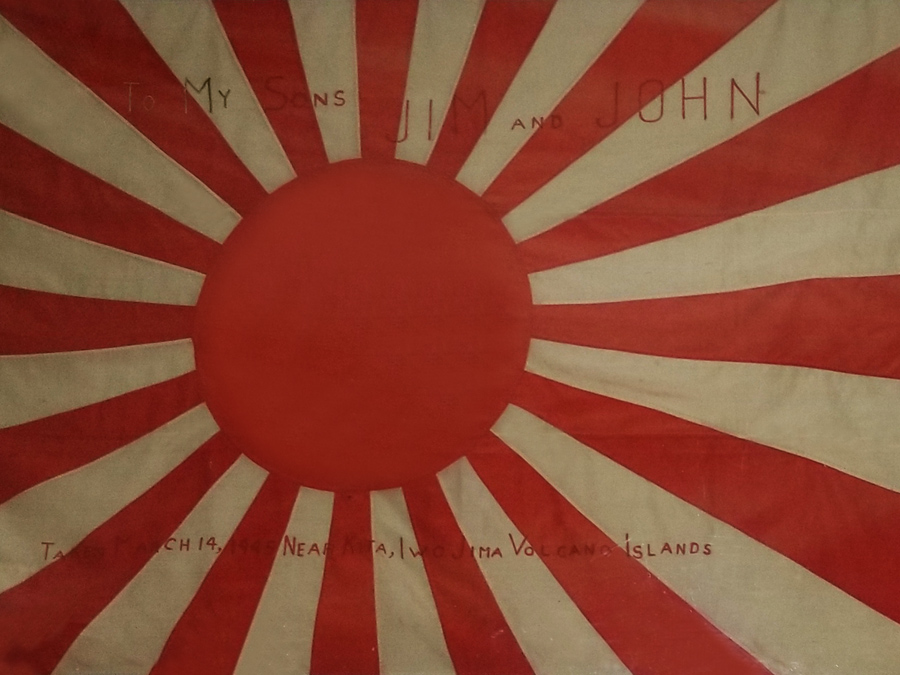 The “WWII-Pacific Theater” Exhibition will be on display at The Highground Museum December 4, 2021-March 6, 2022.

Mark your calendar to visit the Museum during the winter months! Beginning December 4, the Museum will be filled with exhibits, memorabilia and personal stories from the military and civilian history of the Pacific Theater during WWII. The creation of this exhibit has centered around the outstanding donation by John and Maryann Vedder of a family heirloom—a Japanese flag from an area near Kita in North Iwo Jima that was brought home from WWII by John’s father, Dr. James Vedder. A large part of the exhibition will consist of fascinating “real person” exhibits from families that have donated memorabilia and documented stories to The Highground from family members who served in the Pacific Theater during WWII.

Additional exhibits will be created with the assistance of Carl Bogar from Historic Military Impressions and Troy Buddenhagen. To add to the military Pacific Theater exhibits will be two very unique exhibits focusing on the civilian costs to humanity during WWII. A printed exhibit from the Vancouver Island Military Museum in British Columbia, CA (vimms.ca) titled “Women Beyond the Wire” will also be on display. This exhibit tells the story of civilian POWs in the Pacific Theater in addition to the military POWs. A Smithsonian educational poster display “Righting a Wrong: Japanese Americans & WWII” will also be part of the Pacific Theater WWII exhibition. This display tells the story of how the lives of Japanese Americans were uprooted and confined, losing much of what they had prior to WWII, and undergoing an extreme prejudice during this time of a nation at war with their ancestral home country.

Another big piece of this exhibit is the full-scale replica of “Little Boy”, the atomic bomb that was dropped over the the Japanese city of Hiroshima on Aug. 6, 1945. Combat Parts and Kulas Body Shop were the key to completing this incredible model. Read the news article about the project on our News and Resources page.

Combat Parts was the key to what will be an outstanding, permanent exhibit for The Highground—the full-scale replica of that atomic bomb, known as “Little Boy”. Dale and the crew worked diligently to create the 10’ x 28” welded metal replica plus a wheeled cart. They put in an amazing amount of effort to get all the exterior details to match the original from photos and diagrams. After Combat Parts finished building “Little Boy”, they sent it to Kulas Body Shop in Abbotsford for painting.

To complete the exhibition, a very special collaboration with many volunteers throughout this past year, has resulted in over 1,000 handmade origami cranes that will be displayed (on special exhibit frames made by Skip Klabon) as a hope and testament to peace and as a way of honoring all the lives lost across the globe during WWII.

For more information about our exhibits, please contact Theresa by email to museum@thehighground.us or by calling 715-743-4224. The Highground Museum is open daily from 10am–4pm. The Highground is located at W7031 Ridge Rd, Neillsville WI 54456.