The Highground Announces Winners of 2020 Honoring Our Veterans Raffle

The Highground extends a big thank you to everyone who purchased a raffle ticket for the 2020 Honoring Our Veterans Raffle. Their generosity provides important support for the mission to Honor, Educate and Heal.

Congratulations go out to the winners! Mary E. of Dorchester won the ATV, Dick P of Rice Lake took home $1000 in cash and Dan A of Green Bay won the $500 cash.

With the help of ticket purchasers and our supporting partners, Chilson Automotive Group and NextGen, The Highground was able to host another successful raffle. Over $17,000 was raised to help support the mission to Honor, Educate and Heal. NextGen came through for The Highground team as they were looking for an ATV to raffle. When COVID-19 hit the industry, ATV’s became exceedingly hard to find as they were selling faster than they could be produced. With financial support from Chilson Motors and connections at NexGen, The Highground secured the Polaris 600 as it’s top prize. 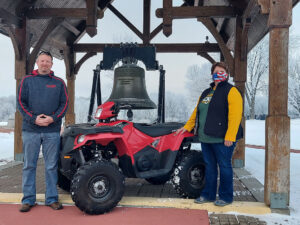 One of The Highground team members learned that ATV winner Mary almost lost. “I had the ticket on the fridge. As I walked passed it last week (two weeks after the drawing), I figured I lost because I wasn’t contacted. Then, I walked passed the answering machine blinking at me. I don’t check it too often you see. But I listened that day, the day I threw the ticket away”, Mary recalled. “There were messages, a few actually, telling me I won the ATV. After listening to the first message, I figured it was a hoax. Then Chris Pettis, Executive Director at The Highground, left a message and someone from NexGen left a message. So I thought I better get that ticket out of the garbage can and return the calls.” Mary’s husband said that Mary will be listening to her messages a little more often from now on.
Mary and her husband picked up her new ATV with less than 10 miles registered on the odometer on Tuesday, January 5, 2021.  Proud and relieved to take their ATV home, they also said “Thanks to Ralph from Colby who sold me the ticket!

A special thank you to Chilson Automotive Group for co-sponsoring the ATV Raffle!