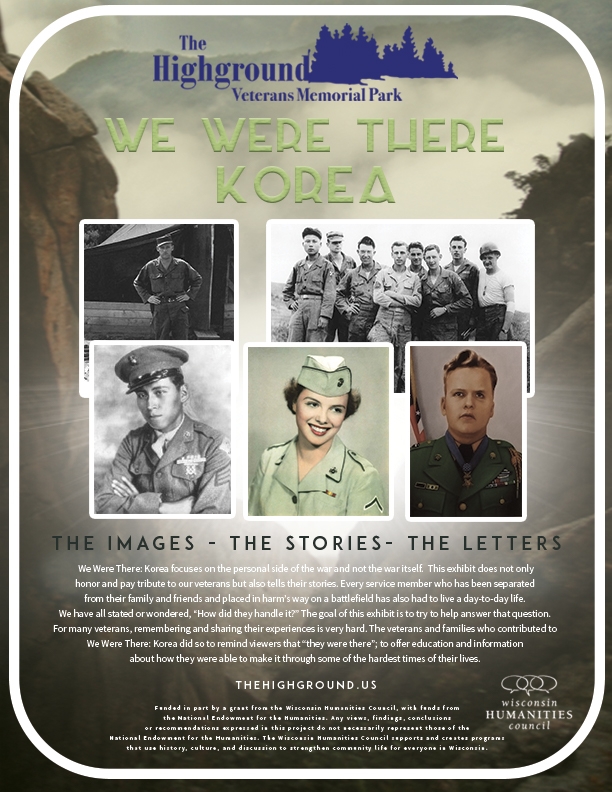 We Were There: Korea

The Highground is proud to announce the “We Were There” Series of traveling exhibits.  This exhibit series will be a four-year journey to create four exhibits that speak from those that served and their experiences.  The traveling exhibits will be compiled of information from Korea, Vietnam, WWII, and The War on Terror.  The exhibits will include photographs, letters, and video interviews with veterans that were serving in the field.

We Were There: Korea is the first element of a four-phase traveling exhibition.  We will be releasing the stand-up banner exhibit in November, and we will be launching the video series sometime in the future.  June Abrahamson has been collecting information from Korean Veterans for the last six months.  It will consist of personal photographs, drawings, stories & letters composed by veterans who “Were There.”  There are many elements that differ from each individual veteran, yet there are also some that are the same, no matter what branch, what era or what country they were in. This exhibition collection will tell these stories. The Korea portion of the exhibition is scheduled to be completed and on display at The Highground Museum from September 15 – November 29, 2020 and available for loan thereafter.

Moving into the next exhibits, Vietnam, WWII, The War on Terror, June Abrahamson will be collecting these items from veterans, completing any edits or restorations that are needed and organizing items into specific themes to be used in the layout. Along with items collected from personal individuals, she will be utilizing the items shared by families in our Registry Books located in the museum archives.

These exhibits will focus on the personal side of the wars and not the wars themselves. These exhibits will not only pay honor & remembrance to our veterans but will tell their stories. Every service member that has been separated from their family and friends and placed in harm’s way on a battlefield has also had to live a day to day life. We have all stated or thought, “I don’t know how they handled it.” By sharing this day to day life part, we feel we will help to educate viewers on how they made it through some of the hardest times of their lives. Areas of the exhibit will also enlighten us on the things our veterans learned and the unbreakable bonds of brother & sisterhood that were made.

If you are interested in donating to these exhibits please contact June at wewerethere@thehighground.us or by phone at 715-743-4224.

Funded in part by a grant from the Wisconsin Humanities Council, with funds from the National Endowment for the Humanities. Any views, findings, conclusions or recommendations expressed in this project do not necessarily represent those of the National Endowment for the Humanities. Wisconsin Humanities strengthens the roots of community life through educational and cultural programs that inspire civic participation and individual imagination.

Donate now to support this exhibit!