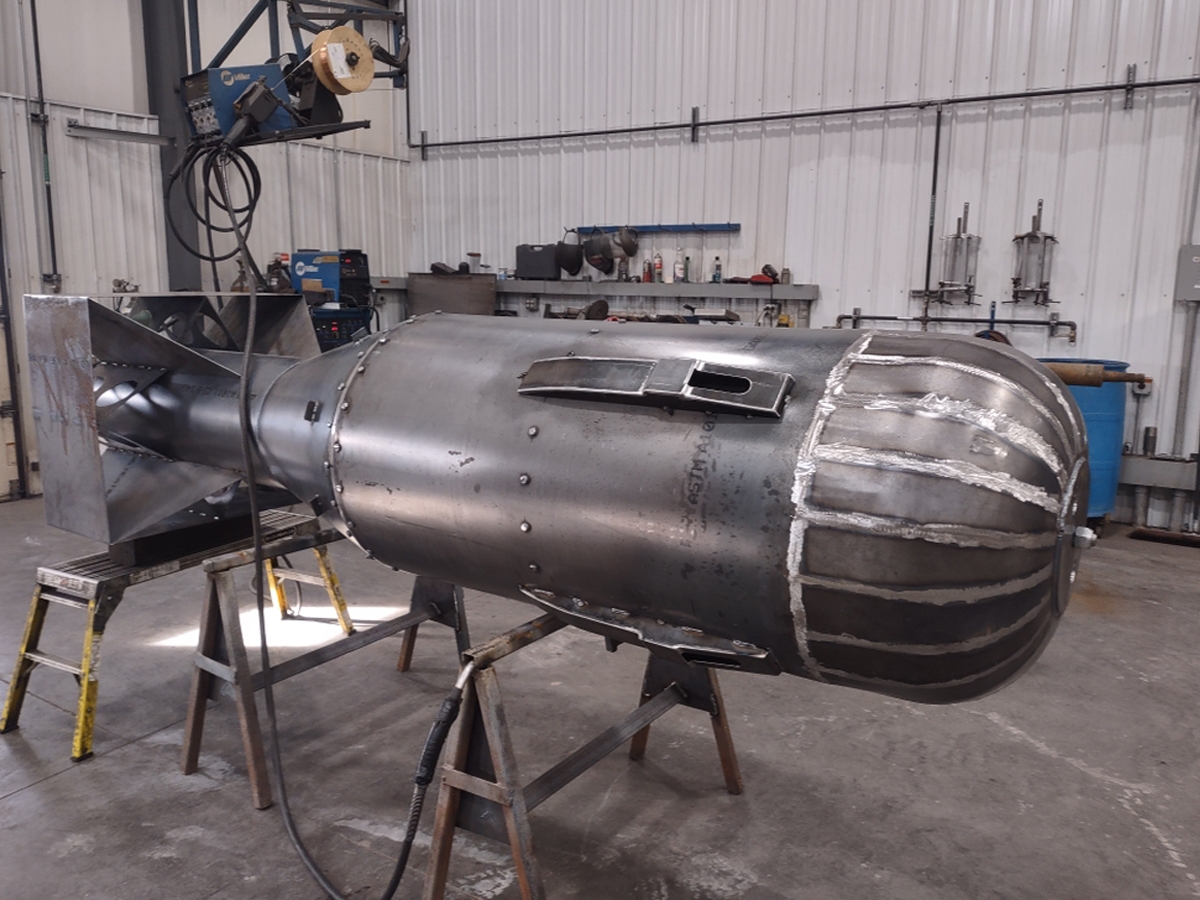 The public is invited to attend the “WWII – Pacific Theater” exhibit Open House on Sat. Dec. 4 from 1–3 p.m, to meet special guests who contributed to the exhibit and view the unique displays.

John & Maryann Vedder, longtime supporters of the Highground, donated a WWII Japanese flag from Kita, Iwo Jima Volcano Islands in the Pacific that John’s father, James, acquired in March 1945 during WWII. Dr. James Vedder was on Iwo Jima during World War II as a naval doctor. Iwo Jima was the Japanese Island that was the site for one of World War II’s bloodiest battles.

“WWII – Pacific Theater” covers the timeline of the war in the Pacific with educational exhibits representing the attack on Pearl Harbor on Dec. 7, 1941 to the use of the atomic bombs in August, 1945.

Combat Parts Inc. in Abbotsford was the key to what will be an outstanding permanent exhibit for The Highground – a full-scale replica of “Little Boy”, the atomic bomb that was detonated over Hiroshima, Japan, helping to end the war in the Pacific. Dale Hammel and the crew at Combat Parts worked diligently to create the 10’ x 28” welded metal replica, including a wheeled cart, putting tremendous effort into getting all the exterior details to match the original from photos and diagrams. After construction was completed, Combat Parts sent “Little Boy” to Kulas Body Shop in Abbotsford for painting.

Troy Buddenhagen, a frequent contributor to exhibits at The Highground Museum, has again brought his expertise and items from his military collection to create unique displays including a life-sized diorama. Shawn Ganther has generously created painted background imagery to highlight the diorama.

The Highground Museum has many amazing items from the War in the Pacific that have been donated through the years. These items will be displayed along with their personal stories.

The exhibit shows the realities of war, but is appropriate for all ages.

Within the exhibit will be 1,000 origami cranes, created by volunteers of all ages, displayed to remind visitors of the importance of peace. WWII in the Pacific was a horrendously brutal experience with over 30 million military and civilian lives lost. The Highground’s intention is to convey the Human Cost of War. An exhibit on one of the most brutal chapters of humanity needed to have a counterpoint, an outreach for peace, and the origami crane project combines the work of local volunteers with the overall Asian symbolism of peace. A 1,000 origami crane display is called a “senbazuru” and is an Asian cultural tradition to promote peace, healing and blessing.

The Highground Museum presents this exhibit, so that we never forget the courage, sacrifices, personal stories and the realities of war, and that we always strive for peace.

Sponsors and supporters include the above-mentioned individuals and Carl Bogar Jr. of Historic Military Impressions; Skip Klabon; Charlotte Ayers; and Katherine Stevenson (in honor of her father, Paul M. Stevenson and his friend and fellow radioman, Harold “Pappy” Doe).