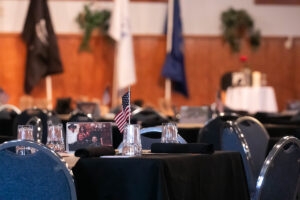 Over 130 Highground donors were invited and honored at the annual “Friends of The Highground” dinner that was held on March 13, 2021 at Castle Hill Supper Club near Merrillan, WI. Given the financial and emotional challenges of the pandemic, these supporters and many others helped The Highground through a very difficult year. Those in attendance enjoyed a wonderful meal, camaraderie and an entertaining program. This annual dinner is a way of thanking those generous donors who support The Highground and Camp Victory through cumulative annual donations in excess of $1,000. Information about upcoming 2021 events were on display along with details regarding The Highground Rising Capital Campaign which launched on April 8. 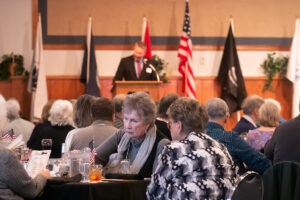 Chris Pettis, Executive Director, welcomed everyone and introduced the staff and board of directors. Chris then explained the meaning behind the “Missing Man Table”. Board of Directors members Bob Barth, Michele Benson, Don Quicker and Gary Weirauch each read a selection of Wisconsin Fallen names from WWI, WWII, Korea, Vietnam and Desert Storm/Desert Shield, Iraq and Afghanistan through present day. An invocation was given by long-time volunteer and contributor Jerry Smith from Neillsville, WI. Many board members were in attendance to thank the donors as each donor was presented with a beautiful certificate depicting the National Native American Vietnam Tribute. 2020 was the 25th anniversary year of this national tribute.

This is the 17th year The Highground has formally recognized the supporters who reached the $1,000 minimum donation. This year, donors and board members from all around Wisconsin and Illinois were able to attend. Three of them have received all 17 plaques—Thank you Central WI Broadcasting, WCCN/WKPG, Donald Quicker, and Dr. John and Rebecca Scaletta. They have not missed a single year of support to The Highground since this recognition was implemented.

From the 2020 donor calculations, the following received recognition for their continued support:

The small staff could not do what they do to honor our service heroes without the hundreds of volunteers and contributors. In addition, Museum exhibits and numerous events are open to the public free of charge because of their generosity.

For donation information, contact Kay at 715-743-4224 or by email to donations@thehighground.us.