Whether it was riding their normal routes or completing routes around their hometowns, the pandemic didn’t stop riders from across Wisconsin as they joined together on Sunday, August 2, to complete the 36th Annual Heroes Ride Bike Tour.

Three routes began their journey to The Highground Veterans Memorial Park days earlier from several locations throughout Wisconsin.  Along the way, the riders collected pledges and donations for their trip from individuals and corporate sponsors. The Western Route, consisting of 36 riders and led by Jerry Simon and Randy Meyer, started in New Richmond. Six riders for the Eastern Route started their ride in Appleton, led by Jim and Curt Braatz. Four riders joined the Southwestern Route out of La Crosse, led by Terri Stott. 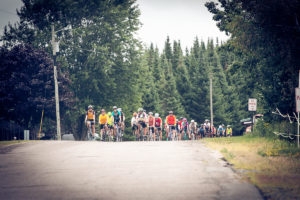 Due to limitations for overnight stays and meals along the way, the Northern and Southern Routes decided to complete their rides, equal to the miles of the original route, around their hometowns instead of making the trip to The Highground. Joan Cervenka led some of the riders from the Northern Route out of Hayward. This year, Chris Pettis, Executive Director at The Highground, joined riders from the Northern Route on Friday. Led by Mike and Kathy Gleisner out of Marshfield, Chris completed 45 miles with that group. On Sunday, Chris joined the Western Route in Osseo to complete their last 40 miles to The Highground.

Check back here for more information about the 37th Annual Heroes Ride Bike Tour which will be held July 30–August 1, 2021. Event updates and more are available on our Calendar of Events page.