The public is invited to attend the Grand Opening of the exhibit, “Supporting the Mission—Working Warriors” at The Highground Veterans Memorial Park Museum near Neillsville, on Saturday, August 8, at noon. Fr Conrad Targonski will be the guest speaker to help open the exhibition. Fr Targonski retired in September 2010 from the U.S. Navy Chaplain Corps with a rank of captain, having served the Marine Corps for 22 years. He is currently the chaplain at Viterbo University in La Crosse. During his military service, he served over 13 months in Iraq, including in the Battle of Fallujah.

Many stories are told of heroic and notable combat missions. More unknown, but highly critical, are the support missions and duties of the countless military roles that are traditionally non-combat. The Highground Museum has combined several exhibits into an exhibition to tell the distinguished history of those who served to support the efforts of the front lines. Additional, special displays about chaplains and the early days of women in the military will also be featured. 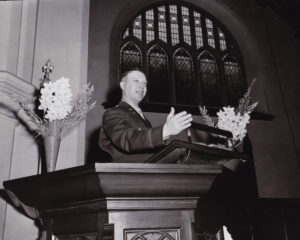 The exhibition consists of the traveling exhibit “Working Warriors” from the Wisconsin Veterans Museum in Madison; the traveling exhibit “American Women Physicians in WWI” from the American Medical Women’s Association; and a special exhibit on Chaplains including a display highlighting the service of Wisconsin Chaplain Clarence Golisch, who served in WWII and went on to become the long-time director of the Bethesda Lutheran Home in Watertown, Wisconsin. Accompanying these exhibits will be a large number of artifacts, uniforms, memorabilia and information to further explore the interesting stories of traditionally non-combat military roles.

The Exhibit and Grand Opening are appropriate for all ages and accessible. This exhibition will be at The Highground from August 8 – September 15.